Sara Robertson is a new lecturer at Duncan of Jordanstone, last week she gave a talk about her work and study into thermochromic and photochromic dyes. These dyes are printed onto fabrics like regular colour pigments but have been given an added special effect. The thermochromic dyes react with temperature. Sara explained when placed in certain temperatures the pigment in the dyes changed to a lighter colour. The photochromic dyes would appear very faint but when placed under uv light the dye would change to a darker colour. Sara explained the uv reactive dyes could last for a longer periods of time the longer they had been exposed. She had pre-mixed some blue dyes with various temperature resistances for us to try for ourselves.

This is what the fabric looked like after all four layers had been added. 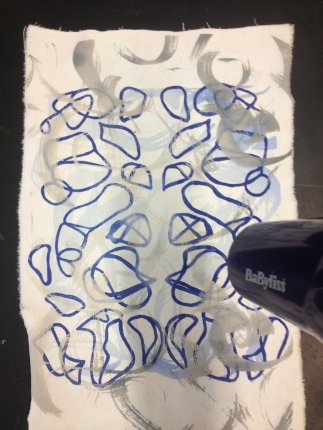 The first thermochromic layer disappears with the direct heat from the hairdryer, the temperature resistance for these dyes is much lower than the thermochromic base dye.

More layers of the dyes become effected by the heat,

The image does not disappear fully but is dramatically lightened.

Here are the results from the photochromic dyes, which react with UV light. 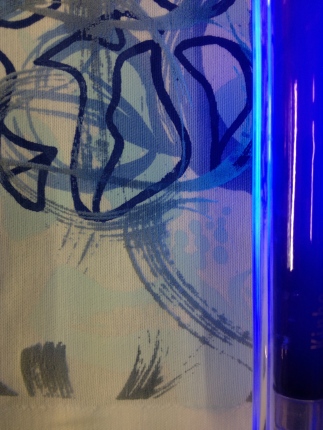 The print before the UV light has had time to effect the dye.

after about 20 seconds the dye changes colour when in direct contact with UV light.

It would appear that the brand Stone Island have created a menswear jacket that reacts with heat. 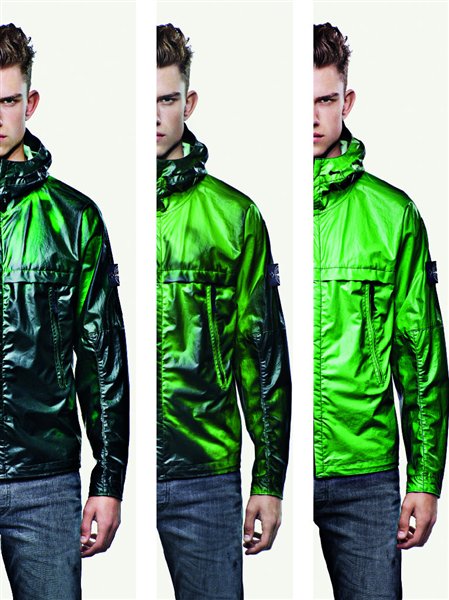 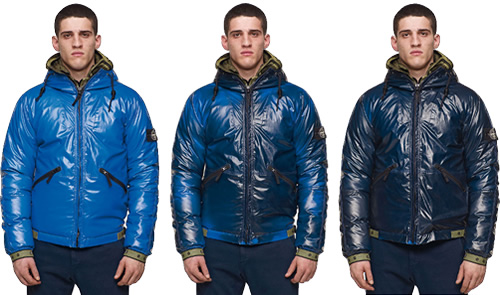 Stone Island’s heat reactive jacket, it has a liquid crystal heat-sensitive coating that when it reacts at around 27°C the jacket starts to lighten into a more intense colour. Cool Effect but with 27 degrees as the changing temperature does that mean everyone could see your sweating underarms, you could hardly hide it if it turned bright green. Uh-oh.